Today I went to the Ferry Building and bought cupcakes, because sometimes, you just have to. Miette was crowded, and when it was my turn I bravely marched up to the counter and ordered six (locals, please do not mentally calculate how much that comes out to be because it was an impulse buy, which happens): two vanilla with chocolate buttercream, two chocolate with vanilla buttercream, and — you guessed it — two chocolate with chocolate buttercream. On the walk back to work I took my time and talked to my best friend about weddings and Greece, weighted down by my delicious burden. I distributed them to the office and then ate one with a cup of green tea and felt much better. [A mint cupcake, not from Miette, but still darn good.]

I don’t know what it is about February — and yes, I feel very silly for being wah wah it’s winter and I’m tired of winter, because today is gorgeous here, almost warm and definitely sunny — but it never goes down very well. And this year there’s an extra day stuck on the end of it! Even though daylight savings begins a whole month earlier than it used to, I’m itchy for summer — I’ll take spring, even, though summer is my one true love — with its lingering light, a longer ‘blue hour,’ and the possibility of getting a sunburn. At the same time, I can’t believe March begins this weekend (!) and winter is nearly over; these days, I’m mostly caught up with the calendar, but I still feel like the weeks go by too quickly. It’s something to work on in yoga, perhaps, in between all those damned downward dogs and back bends: breathe in this moment, and experience it fully rather than hurtling toward the next thing.

I suppose you could say I’ve been un peu — errrr — cranky lately, and the worst part is I’m not exactly sure why. Can I blame the February doldrums? Or what?

This past weekend I realized I hadn’t been out of the city for two whole weeks, and so threw caution to the wind a bit and took off Saturday afternoon, even though there was laundry that needed doing, and a kitchen to clean. I made a big batch of soup, baked a cake, and packed up a bottle of red wine and then we drove through the blowy day to Marin County, taking the winding road past the Seashore and bits and pieces of the bay until we finally turned up at the house in the woods in Inverness. Mostly we were there on a cheer-up mission, but also to spend some quality time with a floppy black Lab and a fire, to listen to the rain patter down quietly on the roof and smell bay leaves for an afternoon.

The cheer-up was on account of a friend (family, really) who’s been sick since the summer —
the kind of sick that necessitates weeks of treatment and even a few surgeries and unexpected trips to the hospital late at night. It’s the kind of sick that is very scary for you and yours; and even when you’re finally on the long road to recovery there are twists and turns that can be frustrating and disheartening. It’s the kind of thing that really can only be remedied with pots of soup and lemon tea bread and Jameson and all kinds of cake which, of course, I am very apt at providing.

When I talked to C on the phone Saturday morning I could tell he was feeling a bit low — this from a guy who is on the whole very positive and full to the brim with zest for life — and the first thought I had after we should go visit them was what should I cook? As usual , my instinct is to comfort through food, and to take care of, even in the tiniest of ways. I made my quinoa soup because I could add extra garlic (I am a big believer in garlic’s health-ensuring qualities) and its nutty, nubbly grains would give a nice kick of protein, which is also good for the healing process — and the good, brothy vegetable base never fails to soothe. Because we’d surely need something sweet to follow, I made a vegan chocolate cake, in a loaf pan, and with chocolate chips added just before baking.

It’s true I haven’t been very experimental lately in the kitchen, but I don’t think that’s necessarily a bad thing. I’ve been half-heartedly working on some (v. important) projects that need to be worked on far more consistently than I’ve been doing, not to mention I’m trying to squeeze in some longer runs, not to mention that whole full-time job thing that some nights has me wanting nothing more than to plant myself on the couch to watch ‘The Wire’ with a large glass of red wine; all of which means there have been a lot of standbys and enormous pots of soup to tide me through. I think it’s a winter thing, which is why I’m ever more impatient for the turn of the seasons, although I rather like the comfort inherent in repeating things I’ve made a lot.

Still and all, it will be nice to make the time to take time again, to eat tomatoes again, to have longer days. However, I mustn’t bemoan this darker season too much; it was pretty nice today, all grumpiness aside. 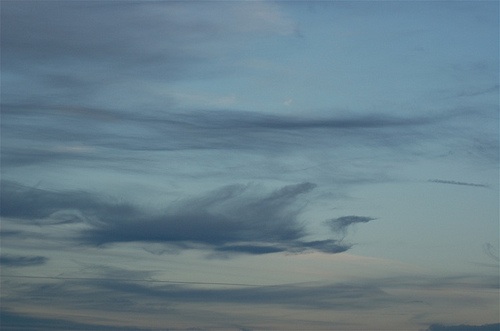 So in the spirit of being gentle with myself in February, I decided to have have another cupcake (a good decision). I did run 6 miles last night, after all, and ate quinoa soup for dinner and lunch to keep things healthy and low-fat — but who cares?! I just wanted that cupcake, and I think it’s OK to treat yourself once in awhile (and it might have gone to waste, and we couldn’t have had that!). Then I had a nice glass of red wine when I got home and made a lentil-chard stew for dinner, which, yes, was delicious.

Flowers work wonders for adding a little cheer, too. See? I know all the things I’m wishing for will be here before I know it. Hold on.