When I was a kid growing up in Sonoma County I had neighborhood friends — lucky me, they were girls near my own age — I’d meet up with for dog-playing and creek-exploring and all else. I can’t remember if we used to call each other; we were so young then so maybe we just met up on the street, a sort of desultory let’s hang out and roam about in our respective backyards kind of a thing. One in particular I had such fun with because at her house they had ducks (!) and chickens, too, I sometimes took care of when they went out of town. We’d go blackberry picking in season, not anywhere in particular but just ‘around’. We’d take them back to her house and douse them with cream and sugar — did we rinse them off first? I hope so but the memory eludes; if not surely they were dusty and a bit disheveled, much like glorious summer itself — and eat in the cool dimness of her parents’ kitchen, swinging our legs under the wood table and trying not to kick the dog.

Last summer I went to the blackberry bush at the edge of my parents’ field and sifted through the berries for the best ones. I made crumbles and sorbet and it was familiar and right. I felt like things had come full circle somehow, though my old friends had long since moved away. What remained was the dry grass under my feet, the sun, the blackberries, that feeling of peace.

When I didn’t live in California — all almost-nine-years — I missed it fiercely. There’s something about this place and if you’re born here it’s hard to leave. If you do leave you most often pine for it; I met many displaced Californians at East Coast parties who felt the same. Invariably we’d end up on someone’s porch clutching our bottles of beer and talking about Pt. Reyes, I mean, that is my place; you know, Wildcat for camping even though the campground isn’t the best but it’s so close to the beach and when the sun sets on a clear night… god! or It’s so different here not that I mind exactly but it’s not California and just can’t ever be

or There are no real mountains around here and I try to go home in the winter so I can go skiing in Tahoe because, I mean, it’s Tahoe right? We’d chuckle fondly about San Francisco and its intensely liberal atmosphere — though, to be honest, it was tinged with the wistful as we swatted at mosquitoes; the nation’s capital, in summer, being not a place for the heat-averse –, about that time the Giants lost the World Series (eternal tragedy), and how the air just feels better out West. For awhile I had an old friend from home who lived in Maryland and we’d meet up every so often for happy hour, mostly to moon over West Marin. When I didn’t live here I came back as often as possible. Sometimes my brother was there, too, and we’d go backpacking in Yosemite or to Point Reyes or just took the dog to Goat Rock back when you could still take dogs. Sometimes my dad and I went kayaking on Tomales Bay, to sit in the sun afterward on the dock of that little place right near the kayak rental and drink root beer. One August it was so hot I wore all my DC clothes and swam in the Russian River and didn’t miss the Atlantic Ocean one bit. The next day we went out on the bay on a blazing morning and saw, incredibly, a whale that had drifted in with her calf (I still swam off the sandbar later, even though I was a little bit nervous). Then I started coming for stolen days here and there in spring, too, to run along the backroads and see the hills green for once. Every single time I left it felt not-right; my heart ached and even though I had a good life back East there was always something missing.

I think what it was was a feeling of place — my place. The ocean-place. A blackberry-place. Home. Now, I do not take for granted I know where that is; I know I’m lucky. I also do not regret the time I spent on the other coast, for I met so many wonderful, true friends and learned a lot and had a good, full life. Anyway — if I’d never left California perhaps I would never have come to appreciate it quite so very much; sometimes to discover where home is you have to leave it. The other side of this is, of course, if you come back you might have to rediscover it — and yourself — all over again.

Four years ago this month I moved to San Francisco and when I think about it the time has slipped by both in a flash and very slowly. It certainly doesn’t feel like less than four years. My life now is so different than what it was when I lived in Washington, not least of all because I tramp up and down steep streets every day, and every so very often — namely: July — I find myself wishing for just one week of heat and humidity and an ocean safe for swimming in. But these are small trade-offs. What I miss most is my little community of friends (for a time we all lived within walking distance of each other and the impromptu barbecues and coffees and chats and meet-ups …) and wearing lighter clothes in the summer and my brother living close enough to see regularly. But that is why there are plane tickets I suppose. 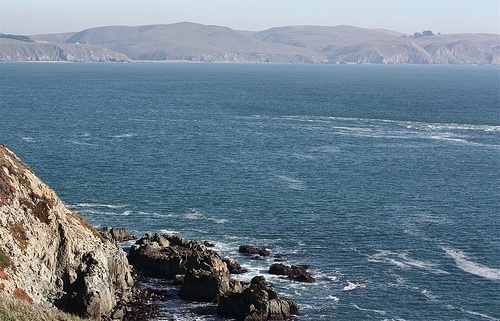 California has given me so much — those blackberries, good coffee (my god, the coffee! I never cared so much until I moved here and lest you think I’m being awfully pretentious I will hasten to add that it’s just that I didn’t know how good a good cup of coffee can be, and thus learned to truly love it for the first time), the picking wild berries for dessert at dusk in the woods, a throwback to that childhood memory, going to my old house in Sebastopol whenever I feel like it, inspiration to write I never quite could hold on to before, being able to go down to the ocean without flying across the country or driving four hours. Among other things, I always ached for that lack of water.

The sea is everywhere in this city. I love the mountains, too (do I!), but my heart belongs to the ocean. You forget sometimes how close it is: the Financial District is brick-red and full of narrow alleyways and miles from the beach. But then the wind picks up and brings with it the smell of salt and brine and you know. You trot down to the Ferry Building for good bread and cheese (and sometimes cupcakes) and watch the ferries sailing serenely off to Marin or the East Bay — water, everywhere, blue and grey. That has been perhaps San Francisco’s greatest gift to me: to be close to water.

The first days living in San Francisco are a blur: I didn’t know the city well, and was sorting out Muni and where exactly was the Main Library and and and. A little bit I missed DC — at least, that familiarity — though not enough to move back. My apartment was beautiful but temporary (a sublet for a few months), and I was ready to settle in somewhere and start the next part of my life. It was an in between time, which is always a bit hard, and so to ease myself along I cooked — I cooked a lot, and I cooked a lot of things I’d cooked when I lived in Washington: tofu baked in peanut sauce served with piles of wild rice, spinach stirred in at the end; asparagus-mushroom-white bean stirfries with brown rice; roasted red potatoes; vegan chocolate cakes. It helped to bridge the gap.

This is a soup I made a lot in those early days; it’s spring, and simple, and just right for now. The main farmers’ market I frequented back then was down at the Civic Center, and I remember for some reason there was always an abundance of broccoli mixed in among all the weird greens I’d never seen in my old life. I’d buy great bunches, take them home, put them in a pot with a few potatoes and vegetable broth, and that was dinner. It comforted in those heady, strange days when I was figuring out how to live in a new place — thrilled and terrified both. And I make it now, to remember.

This city — this shining, white-gold, blue city: mine in a way DC never was. You never know where life may take you and indeed I may not live here forever but for now, and for the last four years, it is good to be home.

And mixed with these were splashes of California poppies. These too are of a burning color- not orange, not gold, but if pure gold were liquid and could raise a cream, that golden cream might be like the color of the poppies. ~ John Steinbeck, “East of Eden” Sautee the onion and garlic in a little olive oil in a large soup pot (I used my big blue). After about five minutes — or until they’re soft — add the carrot and cook a few more minutes. Add the potatoes and the stock and simmer for about 10 minutes until potatoes begin to soften. Add broccoli and about 3 cups of water; salt and pepper to taste.

Bring to a boil, then cover and reduce to a simmer until both broccoli and potatoes are soft and broken up. Remove from heat, add a teaspoon of dried herbs such as basil or herbs du provence, then puree in a food processor or with a stick blender until smooth.